Covering an area of 14,763 sq. km, Serengeti National Park is the largest National Park in Tanzania. The park is located some 320 km to the northwest of Arusha, lying in a high plateau between the Ngorongoro highlands and the Kenya/ Tanzania border, and extending almost to Lake Victoria to the west. Aptly named “endless plains” by the Maasai people, you immediately experience this vastness as you enter the southeastern plains of the park from Ngorongoro. 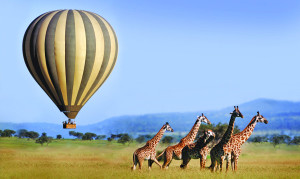 Declared a protected area in 1921 and gazetted as a National park in 1951, Serengeti is the oldest National Park in Tanzania and undoubtedly one of the most famous wildlife sanctuaries in the world. The principal features of the Serengeti are the short and long grass plains in the south and east, the acacia Savannah in the central areas, the hilly and densely wooded areas in the north and the extensive woodland in the west.

There is a variety of scenery, which includes the plains, lakes, hills and the rocks outcrops called kopjes. The main game drive areas in the Serengeti are the Seronera Valley, the Western Corridor, and Lobo or northern Serengeti. The Seronera valley in central Serengeti endowed with permanent surface water attract a large concentration of wildlife throughout the year. 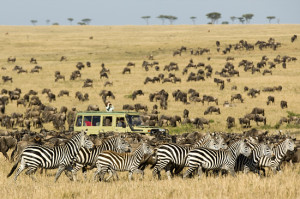 Common animals that can be seen here are lions, buffaloes, impalas, hippos, waterbucks, elephants, cheetahs and the leopard. From December, when the long rains start, to May, eastern Serengeti plains provide the best opportunities for game viewing as hundreds of thousands of the migratory animals are concentrated in this part attracted by the short palatable grass. 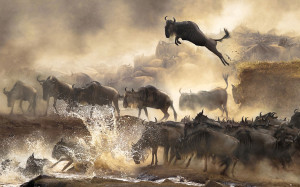 Ndutu Area. Ndutu area is located directly in the path of the Wildebeests migration. From January to April, the southeastern plains of the Serengeti ecosystem and the open woodlands around Lakes Ndutu and Lagaja become the centre of activity of the migratory animals which can be seen congregating in their thousands. 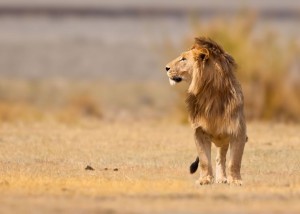 Wild animals are protected as in the National Parks. The craters of Ngorongoro and Empakai are reserved exclusively for wildlife, while the rest of the Conservation Area is shared by wildlife, people and livestock. The Maasai, the main residents of Ngorongoro, are pastoralists who move widely with their herds of cattle, sheep, goat and donkeys in search of pasture and water. In recent years the Maasai have been encouraged to work on the land and supplement their traditional diet of milk, blood and meat. The Ngorongoro Crater, which is the central attraction in the area, is the largest Caldera in the world that has its walls intact. The Ngorongoro Crater floor, a sheer drop of 610 metres below the crater rim, has an area of 265 sq. km, with a diameter of 19 km. The sight of the Ngorongoro Crater is simply stunning. 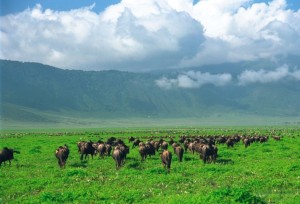 “There is nothing with which to compare. It is one of the wonders of the world….” once wrote Professor Bernard Grzimek. The crater floor is covered with plains animals, including wildebeest, zebra, gazelles, elands, rhino, and a large predator population of lions, hyena and jackal which can all be viewed at close quarters. Cheetah and leopard can also be seen here. The rainy season is between November and May. The altitude at the crater rim is about 2286 metres above sea level, and temperatures can get quite chilly in the evening.